The Beauty of Rotisserie Chicken

By Aimee Copeland
FODAC Board Member

On June 5th, as I vacationed with friends and family on the Carnival Sunshine, I posted a photo of myself wearing a bikini on the beach to Facebook. While this might seem like a mundane thing to do, for me it was an important moment. Four years prior to that, I was fighting to stay alive after contracting necrotizing fasciitis. My life was saved at the expense of my body, as piece by piece my appendages and flesh were removed — my left leg at the hip, a chunk of skin from my torso, both hands, and my right leg below the knee. My initial reaction was to feel grateful to be alive and blessed with a new perspective. But I had not seen my new body yet.

I didn’t actually see myself in a full-length mirror until months after my amputations. Mentally I had begun to process what my amputations would mean for the rest of my life, and I knew I looked different, but it’s true what they say — seeing is believing.

I was visiting a friend’s house shortly after being discharged from inpatient rehabilitation and had to use the bathroom. Again, something as trivial as releasing the bladder for a new amputee is a big deal. I would have to transfer without ADA grab bars in an unfamiliar location. As I carefully placed my forearms on the counter and toilet and gently swung my body to land on the toilet, a gruesome sight entered my field of vision. It was me, reflected by a giant mirror, staring back at myself from across the room.

I hardly recognized myself and was paralyzed as I studied this foreign body. Each limb ended abruptly, with thick scars covering my body. Where my once-flat abs used to sit, a raised scar now cut across my entire belly, accentuated by a wave-like surface where my abdominals had been removed. Stretch marks now appeared on my hips and thighs, a result of massive swelling caused by the deadly bacteria. But the most disturbing sight was where my left leg was once attached. Red, raw skin now stretched from my buttocks to my hip, almost appearing as if I was sitting on a rotisserie chicken. I sat, stunned, disturbed, and distraught.

Cum4k – my path to pleasure

To make matters worse, the person I had been dating for several years was visibly unattracted to me. If he couldn’t accept my new body, how could anyone else? My self esteem plummeted and I feared no one would ever truly love me in this condition. I felt hopeless about dating, but knew I could not remain in my current unhealthy relationship. I vowed that I would find love in the world, whether it be from people that I help, children that I adopt, or someone I might meet. Reluctantly, I left the man I thought I would spend foever with.

Eventually my dear friend Ellie introduced me to the wild world of online dating. It was a whirlwind at first, as I was frequently contacted and complimented. I tried not to take it too seriously and enjoyed meeting people and discussing common interests. I began to focus on enriching myself through books, exercise, music, and personal exploration. I finally felt free! As I meditated on my own bodily changes, I felt each part of myself — not just my physical body, but my energetic flow, my enveloping spirit, and all of my dreams and goals. I realized that I am not my body, this bag of skin that carries around my bones. I am so much more! An adventurer, lover, daughter, sister, friend, seeker of knowledge, teacher…. I am not a human being, I’m a human being. A human living. A human doing. I am a verb that can never be contained because words can’t begin to encapsulate my essence. I felt resurrected, the Phoenix reborn from the fire, with new self esteem and self respect.

Several months later I felt better than I ever had, and was dating several people I had met online. Eventually I met one who was better than all the rest, who truly sees me and thinks my body is perfect exactly as it is. More important than him seeing this beauty was ME accepting my new body, cherishing it, and appreciating all that it does for me. Only after I learned to love myself could anyone else truly witness my imperfect beauty.

After years of covering myself with baggy t-shirts and shorts, even at the pool, I took a huge step toward loving my body — I bought a bikini. I would not longer cover myself in self loathing, but have begun to celebrate my body instead, which is beautiful because of my scars, not in spite of them. Each blemish tells a memory. Each skin graft a story of survival. Every imperfection has culminated into the strong, wise, compassionate woman I am today. And I wouldn’t trade those qualities for the flattest abs or the smoothest complexion, because physical beauty fades away but the spirit within shines on the entire world, illuminating life for everyone you meet. Shine on. 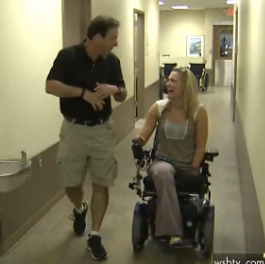 “This wheelchair has helped me to be more mobile going to shop and out to eat therefore uplifting my spirits and outreach.”